Samuel Brothers is proud to have been awarded Bronze Armed Forces Covenant Employer Recognition Scheme (ERS) status. Samuel Brothers recognises the vital role of Britain’s Armed Forces, and the valuable contribution that members of the Armed Forces and Reserve Forces make to Britain’s defence, service to communities, charity and their civilian workplace. 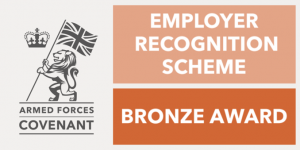 The Employer Recognition Scheme was launched to reward employers who support Defence People objectives and encourage others to do the same. This includes employing serving and former members of the Armed Forces community and demonstrating flexibility towards training and mobilisation commitments for Reservists and Cadet Force Adult Volunteers.

Samuel Brothers pledged to support the armed forces following the signing of the Armed Forces Covenant in 2020, demonstrating its commitment to support veterans, reservists and their families currently in employment, and to encourage those who serve, or have served, to join us at Samuel Brothers where we can utilize the skills that service people can offer in thew workplace.

“As a company that supplies into the defence market, it is vital that we take further steps to embrace our support. Samuel Brothers are delighted to have received a Bronze Award. We hope this award will encourage more service leavers, reservists, and cadet instructors to consider Samuel Brothers for their next role, as we recognise their dedication, professional standards, and discipline.” Service people, veterans and their families occupy a unique place in our society, and our commitment is to support and show our respect to the military community.“

“I would like to thank all the organisations who have proven their support for the Defence community during such unprecedented and challenging times. The vast range of those recognised this year demonstrates how employing the Armed Forces community makes a truly positive and beneficial impact for all employers, regardless of size, sector or location.”

A big welcome to Paul Goodwin

Samuel Brothers are proud to support the UK Armed Forces having signed the Armed Forces Covenant achieving Bronze Award in 2021.

The importance of a tailored suit