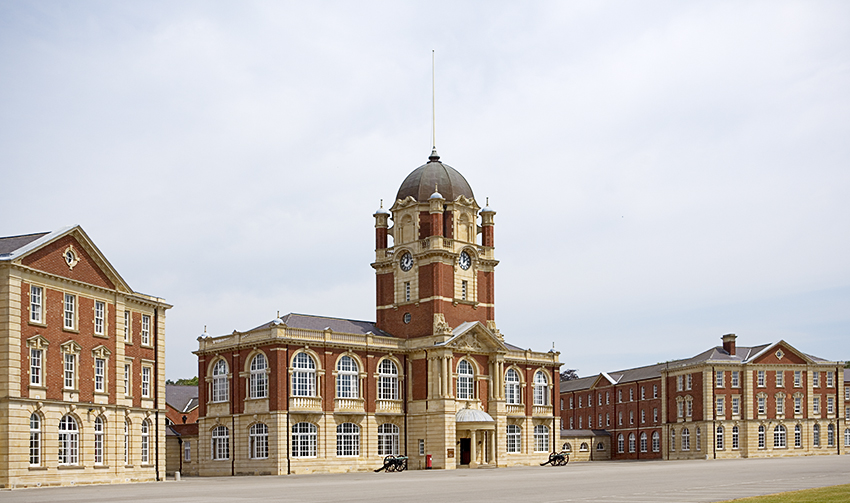 Samuel Brothers (St Paul’s) Limited is proud of its long history making bespoke military uniforms for some of the finest regiments in the British Army. Samuel Brothers holds a Royal Warrant as Tailors to HM The Queen, and are particularly proud of the work they carry out at The Royal Military Academy Sandhurst.

All officer cadets in the British Army attend Sandhurst, and Samuel Brothers has worked with the Academy for over 40 years. They attend Tailor Days at the Academy three times each year and get to know many of the cadets personally, following their careers with interest. This is an enjoyable experience for all the tailors at Samuel Brothers as the professional relationship built with cadets is often maintained throughout their careers, with officers having ongoing requirements for new dress uniforms, suits or other items of accoutrement.

Lee Dawson, Managing Director of Samuel Brothers, and said: “I’m extremely proud to work with the officer cadets at Sandhurst. I’ve only been visiting The Royal Military Academy Sandhurst for the past 10 years, and its great fun to meet them and watch their careers grow. So far, I’ve personally attended 30 Tailor Days and throughout that time we’ve made over 1,500 sets of Mess Dress”, having attended over 260 fitting sessions, supplied over 4500 sets of headdress, numerous suits, shoes and other items that these young men and women require for their wardrobes.

The company has come a long way from its humble origins on Ludgate Hill, London, in 1830. Samuel Brothers are now tasked with making the finest uniforms and suits for army officers, and also has foreign dignitaries, diplomats and heads of state amongst its clientele.

Samuel Brothers has a long and distinguished tailoring record with the British Army and was actually commissioned by The War Office to produce the first ever waterproof coats for British Officers during the First World War. The company was heavily committed to support the war effort during both world wars and then in 1945 where the focus turned to de-mob suits. Still Samuel Brothers focuses its attention on services to the British Armed Forces, but also supplies into the UK Fire Service, along with a number of civil and Government organisations.

The Samuel Brothers ethos is to source only the finest British cloth and the company is proud of its long association with British textile mills. Clients looking for the correct attire for all kinds of occasion can rely on Samuel Brothers for the expertise and quality of any suit or regimental attire, including any essential accessories or accoutrements.

The importance of a tailored suit

A big welcome to Paul Goodwin